This is how our Lord and Savior Jesus Christ feels whenever a new soul turns to Him and accepts Him as savior.

Let us all accept Him today.

You’ve just been Rick Rolled. Let me take this moment to remind you of the following:

Jesus is never going to give you up.

Jesus is never going to let you down.

Jesus is never going to run you around, or desert you.

Jesus is never going to make you cry.

Jesus is never going to tell a lie and hurt you….

So join me, and step through Heaven’s gate. Don’t believe Heaven is real? Here’s a picture of God Himself opening the door to Paradise: 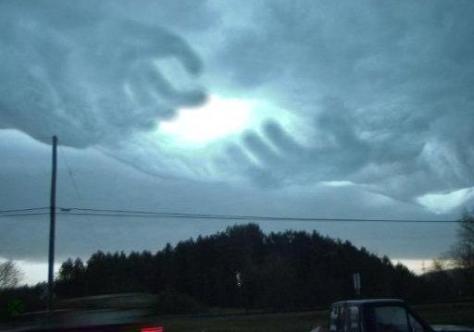 Dear friends, Heaven is real. And once you step through that holy gate, God will take care of you for all eternity. He loves you. He loves you. He loves you and I and everyone. But we must accept His love i we are to join Him in Paradise. Please won’t you accept a one way ticket to Paradise and accept Jesus?  I know Jesus, and I think you should too.

Be cool with Christ. Make Jesus your homeboy. 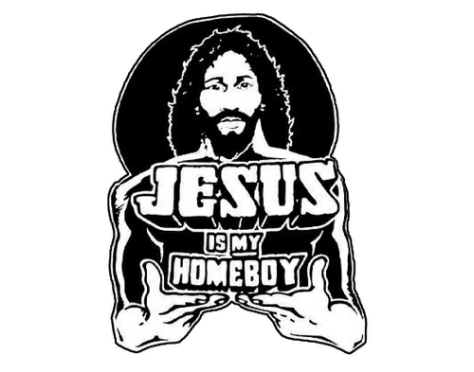 Today I would like to highlight the evils of Coca Cola. Coca Cola is an innocuous enough drink at first. It is American at its core, as American as apple pie and atom bombs.  It is a sweet, sweet drink that many of us enjoy.  However, let us look deeper at Coca Cola.

Coca Cola rose to prominence during the 1950s, and gained a stronghold on American culture that remains steadfast to this day. With Coca Cola, America conquered the world. Consider this image from China: 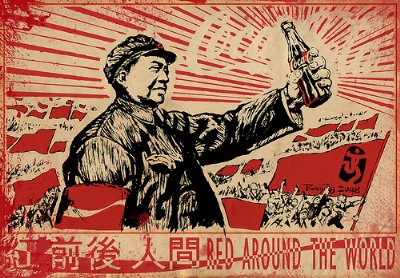 Looks harmless enough at first, right?  But let’s look closer. Look at the slogan at the bottom of the image, “Red Around the World”. This is a clear Communist statement. And let us not forget the imagery in this advertisement. We are looking at a peasant farmer, the leader of the Chinese Communist Revolution, the pawn upon which Mao’s evil reign was carried.  This suggests that Coca Cola is, in fact a Communist organization. This is not only encoded in their red color, but also within their “Santa”: 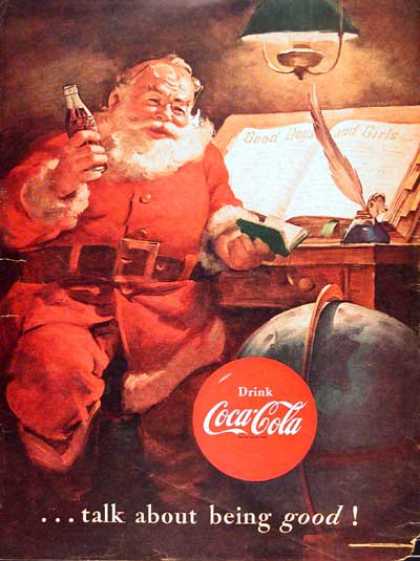 What’s so wrong about the Coca Cola Santa? Santa replaces Jesus as the central figure of Christmas, leaving little boys and girls to forget about Jesus Christ and wait for a man in red with a beard to come down their chimney at night. Ever wonder what Santa Claus looks like when he’s not in his red suit? Here’s a picture of Santa when he’s not at work stealing the hearts and minds of American children: 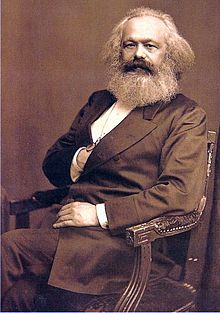 That’s right, boys and girls. Santa Claus is nothing less than an allegorical version of Karl Marx. Through Coca Cola, Karl Marx is stealing the hearts and minds of our children. The Communists are using Coca Cola to lead American children away from the Church, replacing Jesus Christ with Santa Claus.  The implications are clear. The Communists are encroaching all around us. While the Soviet Union has fallen, the Communists continue to attack. Are they successful?

You bet they are. They are destroying what made this nation great. Look at trends from the end of WWII until today. You’ll see a clear decline in the religous-ness of America. Why? Because the Communists have led good Christian souls away from Christ and into sin. The Communists are here as we speak. Perhaps they are the foot soldiers of the antiChrist.  What is clear is that we must combat them, lest we lose ourselves to Satan.  We must combat this encroachment upon our faith. We must combat the Coca Cola company.

Repent America, and reject Satan in ALL his forms. Hell will be waiting for us if we don’t.

Recently, I have been accused of attempting satire with this blog. This site is not satire. This site is not a joke. This site is not run by a “poe’, a stooge, an atheist, or a heathen. I am a True Christian, trying to defend the word of God.  I was born into a family which did not have strong faith, but came to know Jesus after a near-death experience. I was previously staunchly anti-God. But then I nearly died. Lying there, on the table, I saw myself moving toward the light. And I heard God’s voice calling me, a moment when I realized that my entire life up until that point had been a lie. I had spent my entire life up until that point mocking God.  After that point, I learned that it was my duty to defend Him.  This was confirmed when I opened up a Bible that very day or the first time in years. The first page I opened to featured the conversion story of Saul, who went from stoning Christians to defending the faith.  I am another like Saul, and I live to defend our Lord and Savior Jesus Christ.

Yes, this blog gets aggressive at times. Yes, I get angry. Yes, I condemn heathens. Yes, I am a radical.  But I exist to serve our Lord Jesus, and bring people to Him.  And the only way to receive His salvation is to be born again in His glory. Ye must reject all evil. Ye must reject all that goes against His Word. Ye must live by the Laws of God, even more importantly than by the laws of man.  Ye must accept the Bible as True.  Paradise will be a wonderful place, friends, and I hope that you will be able to enjoy it by my side.  This is why I’m so aggressive.  Sure, if you accept Creationism and the Word of God, you lose much of modern science. But if you reject the Word of God, you lose your soul.  Would you rather be mocked in this lifetime and live in paradise for eternity after death, or be glorified in this life and rot in hell for eternity after death? I choose paradise, and wish the same for you. Won’t you join me at Jesus’ feet?

So go ahead. Feel free to keep mocking. I’ll be in paradise while you sit in hell. Please, please, please just repent from your heathen ways and accept Christ as your savior.  He died for all of us. We need only accept Him and be Born Again in His glory to enter His Kingdom, where the lion shall lay down with the lamb.  Please friends, accept Him and join me in His Kingdom. I will be praying for you.

I have recently come across a True Christian organization located at Montana State University in Bozeman Montana. The MSU Truth Group prides itself in defending the teaching of good Christian values, and rejecting the teaching of evolution at the university level.  I just recently communicated with them through email, and it turns out that they are good Christian men and women.  They are true Christians, and they reject sin in all its forms.  Turns out they’ve even made reddit: 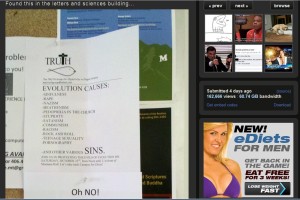 The MSU Truth Group at work

These True Christian Soldiers consistently put up fliers across campus, hold protests, and lead people in prayer.  Let us pray for them, and help them in their efforts. They are good Christians, far better than Campus Crusade for Christ because they do not accept huge amounts of monetary funding. The MSU Truth Group is run completely by students, for students, and for Christ.  These good Christians donate their time and effort to spread the word of God across their campus, and I hope that other Truth Groups might pop up across the nation.  Let us build the Truth Group into a national organization to rival Campus Crusade. Let’s take back America for Christ, in the words of the Truth Group.

So apparently Snickers is working for Satan. A recent Snickers advertisement blatantly mocks Christ, in a manner which must have been inspired by Satan himself. Here is the offensive advertisement: 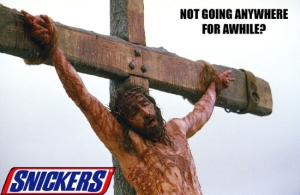 This advertisement shows the obvious influence of Satan on Snickers, and the sad, sad state of moral judgment in America as a whole.  Only in America can one find our Savior, on the Cross, being mocked by a CANDY COMPANY.  America is the new Rome.  Jesus was mocked on the Cross by Roman soldiers just as He is here being mocked by Snickers. Let us give unto Caesar what is Caesar’s.  Let us boycott Snickers and drive them into bankruptcy.  They are an obviously evil organization,working for Satan. Let us pray for their workers and boycott their product.

This also shows the evils of capitalism. The capitalists will stop at nothing to sell their wares. They will even mock our Lord. Capitalists in America use half-naked women in unchaste poses in advertising on a regular basis. America even has Victoria’s Secret. Don’t know what Victoria’s Secret is? It’s that she’s Satanic and doomed to burn in hell for all eternity. I mean, look at their advertisements sincerely. Here is an example:

Read the caption on that advertisement: “No one’s perfect until now”.  Obviously they forgot about the perfection of our Savior and Lord Jesus Christ. America is in a sad state. This is a dangerous time. The anti-christ has his hold strongly on the throats of modern society. Soon friends, soon Jesus will return to claim His throne. Let us prepare for Him, and reject sin in all its forms.

Just stumbled across an interesting article. Apparently EO Wilson now rejects the idea of kin selection….HIS idea of kin selection.  If evolution were true, then why would he make something up and then reject it decades later? This shows the weak, weak basis for much of evolutionary thinking. Original article here.

We are doing the Lord's work!